The hot gases from the combustion process move from the bottom left to the top and then down the right hand side of the boiler structure. As the hot gas moves through the boiler it loses energy to the water and the gases becomes cooler as a result. There are various heat exchangers in the boiler which extract energy from the hot gases and transfer it to water. 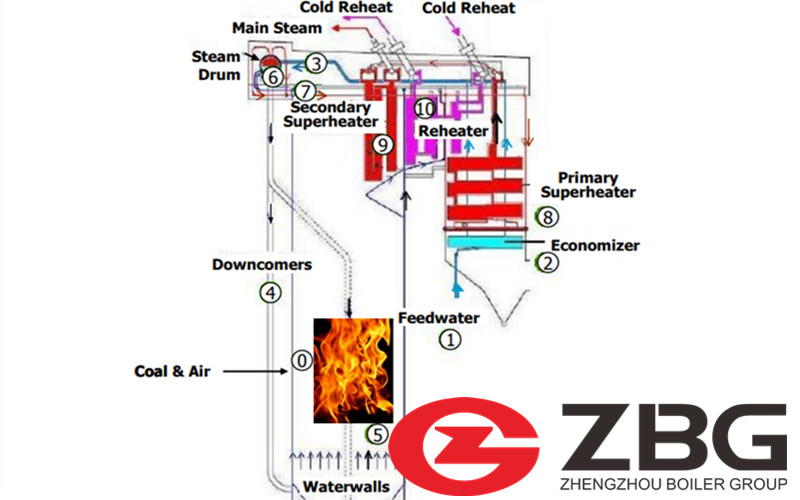 The following diagram shows the inner workings of a boiler. The numbers in the diagram are described below.
0) Coal powder and air are blown into the boiler and combust to form a fireball.
1) Cool feedwater enters the boiler at the bottom right.
2) The feedwater is heated in the economizer by the warm exhaust gases exiting the boiler.
3) The warm feedwater is sent to the steam drum (6) where liquid water is separated from steam formed in the waterwall. In a super critical coal plant steam is not created. Liquid water becomes a supercritical fluid in the superheaters at a pressure of greater than 221 bar and a temperature of greater than 400C. Therefore there is no steam drum. In a supercritical
boiler warmed feedwater passes directly into the downcomers.
4) Liquid water flows down the downcomers on the outside of the boiler to the bottom of the boiler.
5) Water flows up the tubes in the waterwalls of the boiler and surround the fireball of burning coal. The water in the tubes is heated by radiation from the fireball. Some of the water in these tubes turns into steam.
6) The steam and water in the waterwall tubes is sent to the steam drum, where steam is separated from liquid water. Liquid water in the steam drum flows down the downcomers on the outside of the boiler.
7) Steam from the steam drum is sent to the primary superheater.
8) Steam is super heated to a high temperature and pressure in the primary superheaters and then moves to the secondary superheaters.
9) In the secondary superheaters steam meets the very hot gases exiting the top of the boiler. The steam is heated to its final temperature and pressure before leaving the boiler as main steam. The main steam is sent to the high pressure steam turbine. The steam turbines drive a generator which produces electricity.
10)Steam exiting the high pressure steam turbine is called cold reheat. It is reheated in the reheater and sent back to the second steam turbine.

By the time the flue gas exits the boiler most of the energy in the coal will be transferred to the water in the boiler. The hot gases are cleaned up before they are sent to a stack. Feedwater is generally supplied by condensed steam from the low pressure steam turbine. Large amounts of cooling water are used to condense this steam into liquid water in the condenser.